We’re at London’s BVE show where so much exciting new kit and gadgets finally got…well, fiddled with!

One the way to BVE – whilst catching up on the twittersphere – I spotted a tweet from the guys at @DSLRDEVICES, the makers of a wonderfully simple and low cost jib/crane that I’d seen online a few months earlier. Spookily then, just as I arrived, I spotted two people setting up a DSLR jib and lo and behold, it was James & Becky from DSLR-DEVICES.com, showing off their fantastic kit…plus their prototype Mo-Co/Timelapse system, which looked pretty sweet! It was great to also find out that they hail from the same neck of the woods as Fraktiv, so I’m sure one of their jibs will be on our shopping list pretty soon…unlike the behemoth at the other end of the hall… 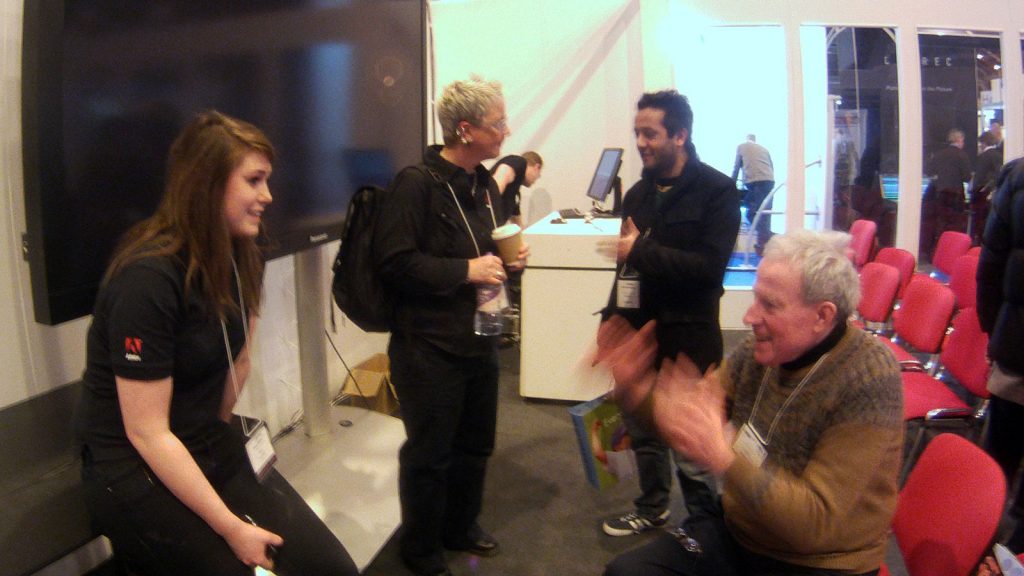 Angie Taylor on the Adobe stand 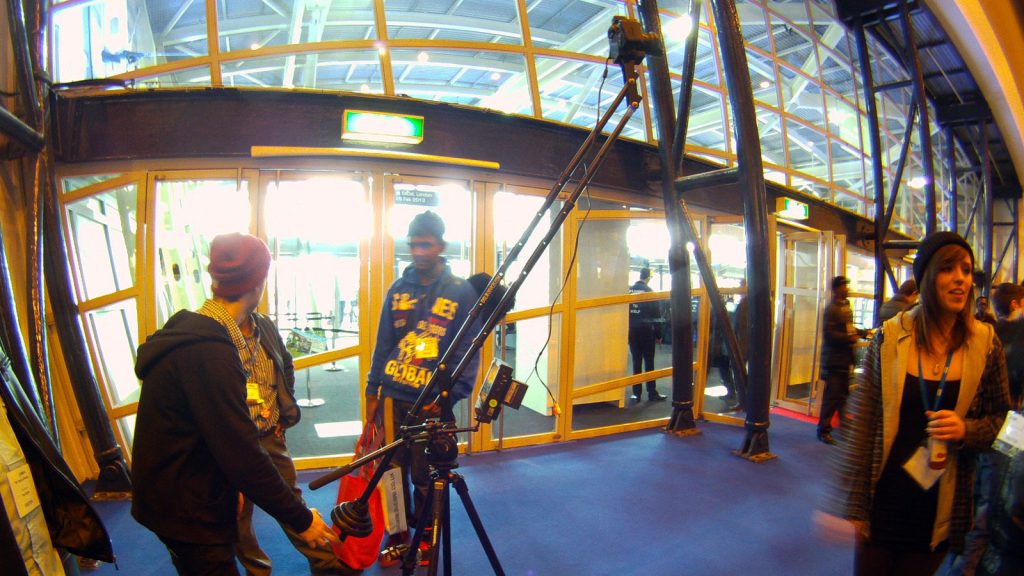 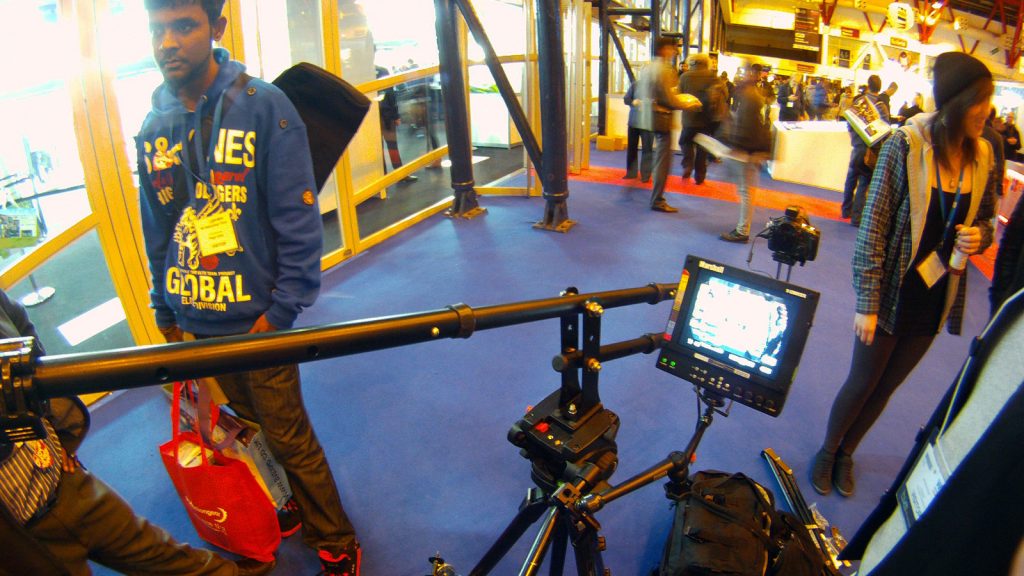 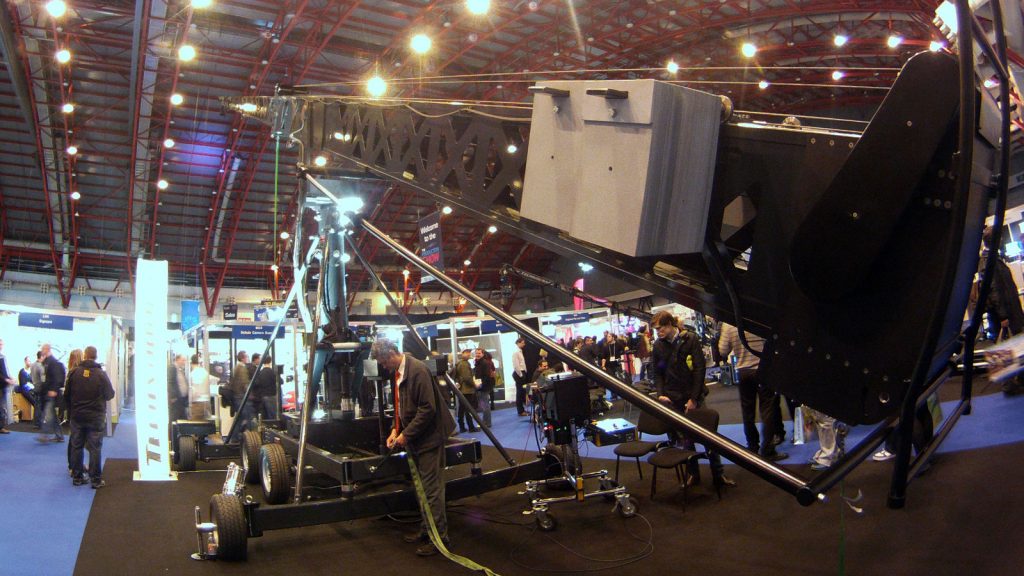 Anyhow, back to the browsing…at Fraktiv, we’re currently on the lookout for a high-end DSLR or Super 35mm video body – plus all the usual accessories – and this year’s BVE didn’t disappoint, with pretty much every option available at the hall, with the exception of the just-announced Nikon D800 (or at least I didn’t see it anywhere). Plenty of talk of Canon 5D-next too and lots of C300s around as well,which I finally got to have a play with…a wonderful looking and functioning bit of kit (well, based on 30 seconds of fiddling whilst being barged by about 50 other keen punters). The Sony FS100 was also a great find, and after a bit more reading up on this cracking little camera, it looks like it could be a serious contender for my hard-earned GBP (1080p50 and the ability to use MFT’s new aperture adapter making this a pretty unique proposition). One other great find though, was hireacamera.com, who had some great and knowledgeable staff, and would appear to offer a great service. Will certainly be checking them out one day soon!

Away from camera and grip gear – well, for a bit anyway – I headed over to the Avid training sessions area, where the wonderful Mr. Barry Stevens was holding the fort down admirably, demoing everything new in Avid-land. Barry is one of those guys who’s essentially a deity in our industry and it’s always a pleasure to hear him giving something back! Not being an Avid guy myself, the sessions weren’t really my cup of tea, but each and every session seemed to be packed to the rafters – well all 22 suites and lots of overspill into the adjoining corridors – and all delivered in Barry’s inimitable style. Further afield (and owing to a tweet I’d spotted from Adobe’s After Effects product manager, Steve Ford), I headed over to Object Matrix, who’s clustered nearline storage solutions we’re pretty hot news at this year’s show. Ok, so storage is never the hottest topic out there, but their solution is fast, robust and as future-proof as you’ll ever get in this business…USB3/eSataP/Thunderbolt/InfiniBand/FC…ugh, it goes on. Bonded ethernet, simple! 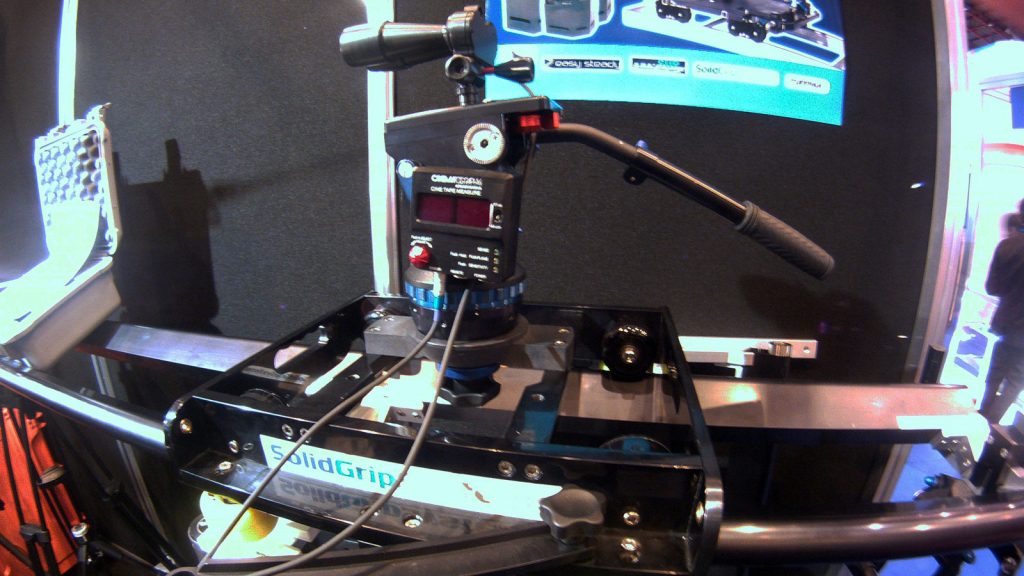 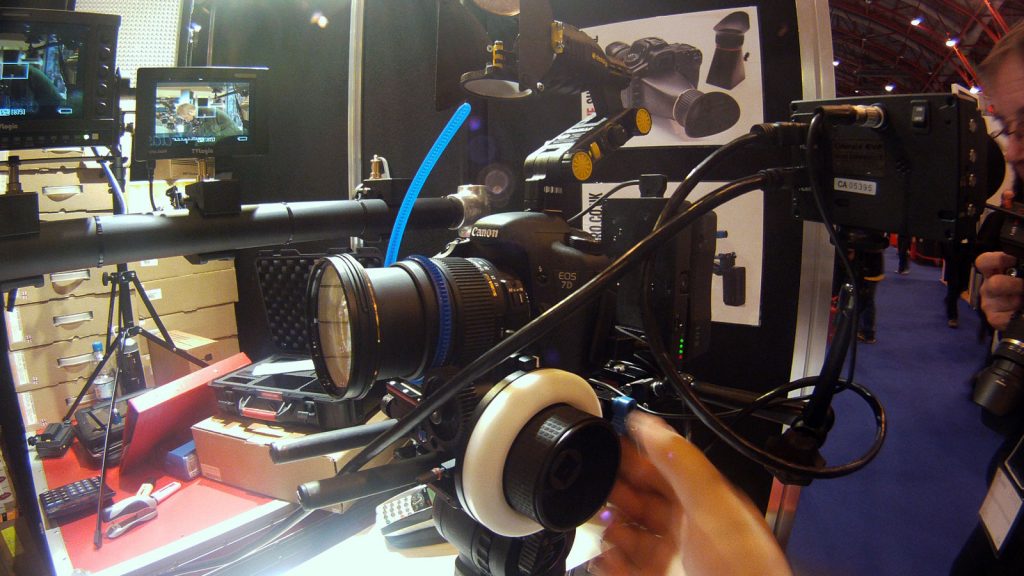 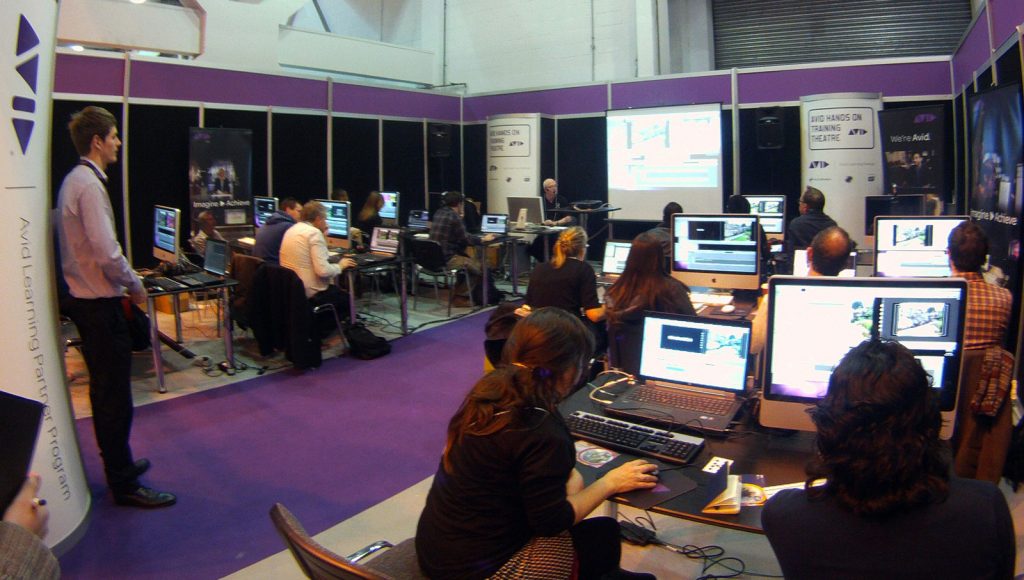 Barry Stevens on the Avid stand 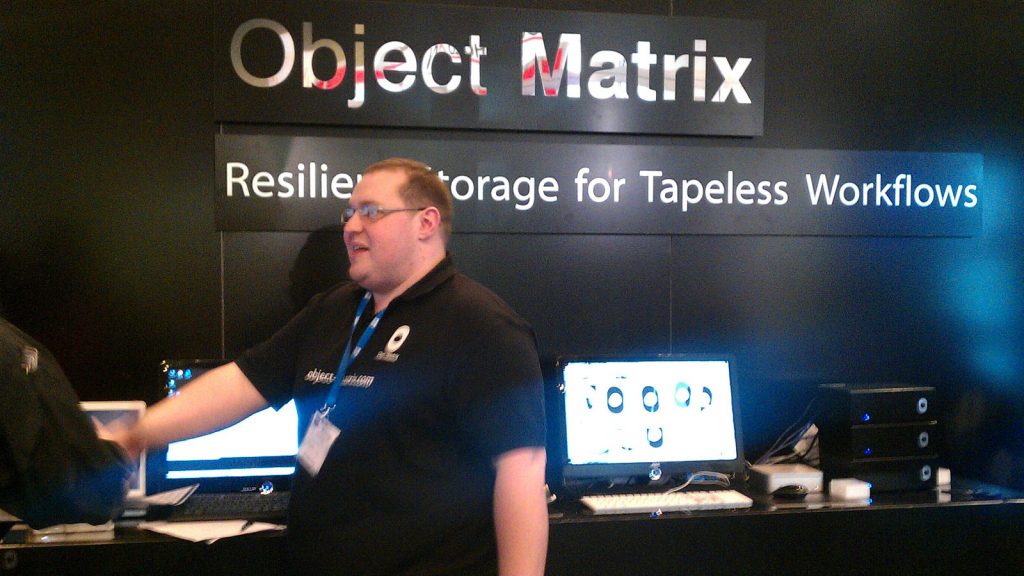 Here at Fraktiv, we’re mad keen sports people, and we’ve been lucky enough to both partake in and work in a field of sports that we all love. For the most part, this involves anything with two wheels and without an engine, and for many, many years, we’ve been combining our love of bikes with our love of filming on and around this noblest of inventions (to borrow a line from the brilliant RED 4K bike film, LifeCycles) . We’ve used a variety of technologies over the years, including bullet cameras, DV cameras and point-n-shoot cameras gaffer-tapped to one’s chest (to name but a few), but nowadays, there’s only really one option…the almost ubiquitous GoPro. There are, of course, rivals to GoPro’s throne, including the very capable V.I.O. POV.HD and cameras such as the Contour HD and the Drift products, but GoPro are certainly the market leaders in this field and with good reason – cheap, reliable, flexible, very good video quality, lots of functions and with a sneaky little port on the back that allows GoPro (the company) to invent new ways of powering, viewing and sharing your content – and with their new Hero HD 2, that seems only to continue to grow. 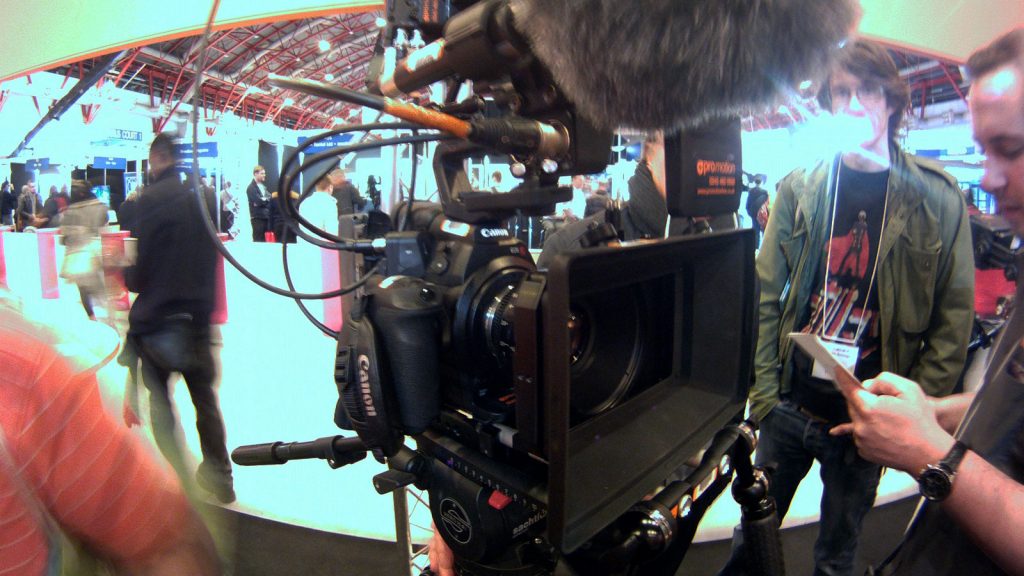 Canon C300 with bells and whistles 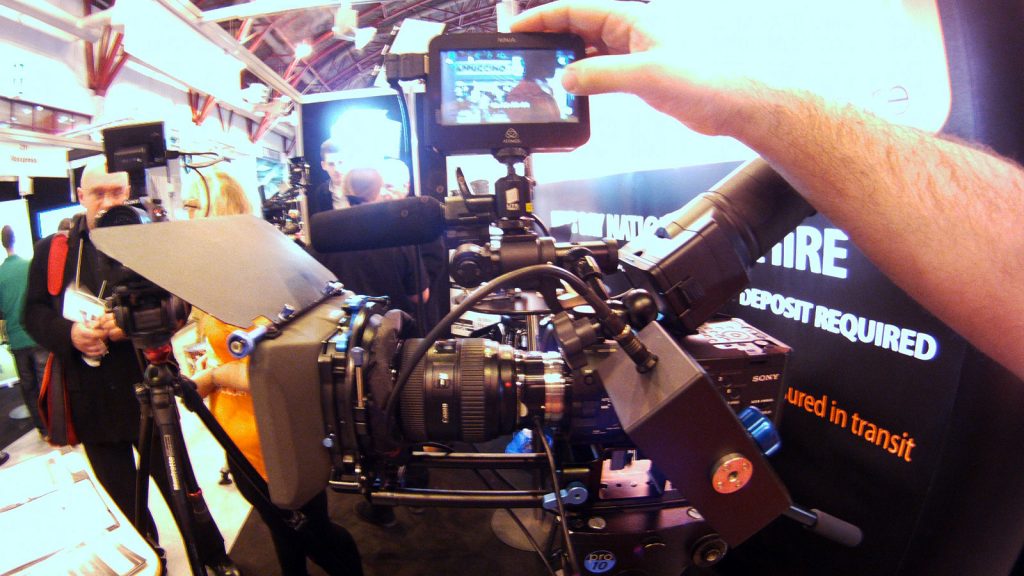 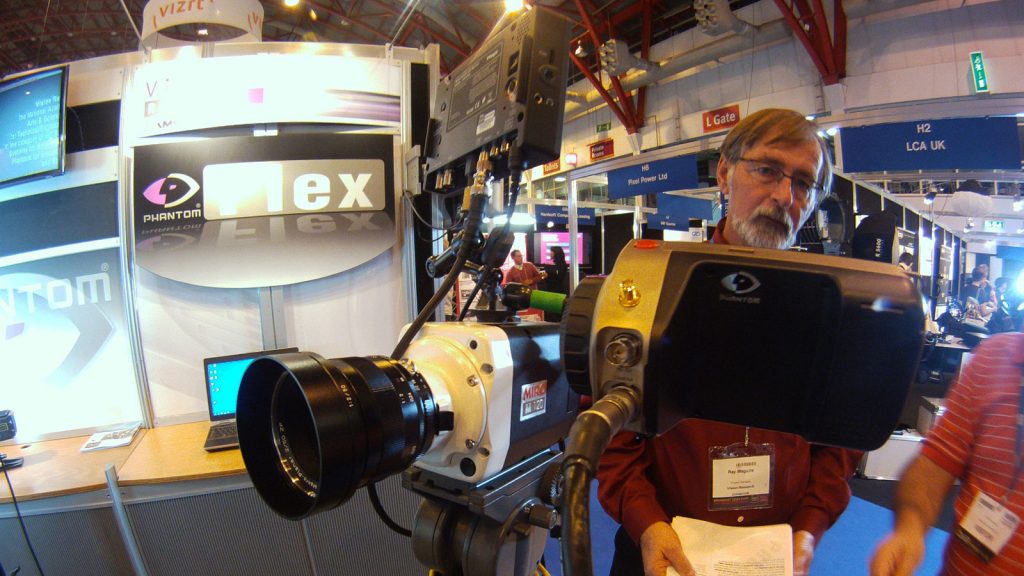 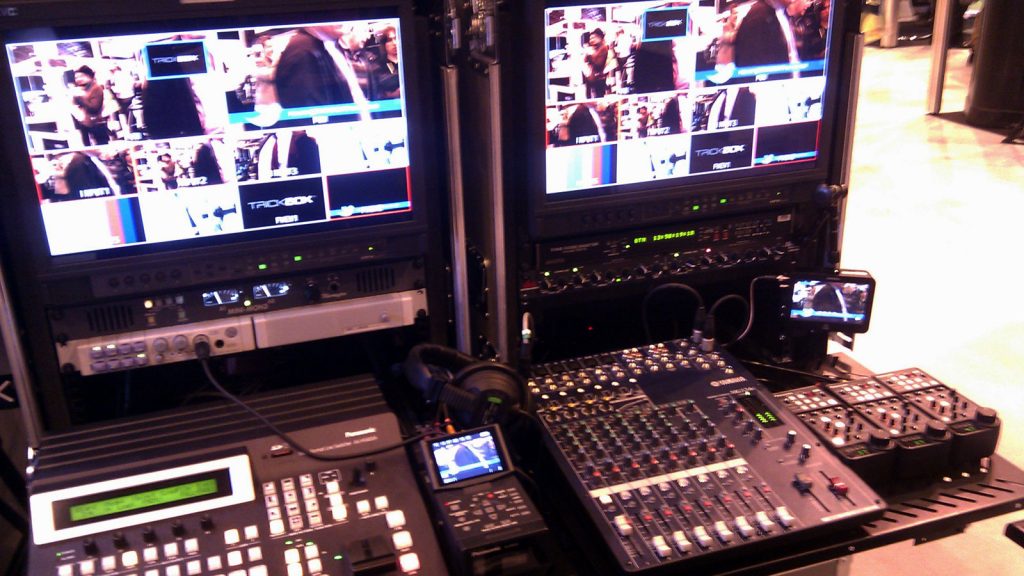 However, Fraktiv’s interest in the GoPro cameras goes a bit beyond filming yourself POV-style with a look of sheer terror or better still, a big gurn on your face, as plans are afoot in our secret lair to develop a GoPro-based product/technology that will give some unique views that are unachievable using any other camera technology out there. So, in pursuit of our goal, we met up with the Mark from DogCam Sport (a supplier to Fraktiv for all things GoPro) and his colleague Luke from V.I.O. for a quick chat, and also the guys from ActionCameras, and then headed over to the GoPro booth, where we spoke to the UK heads for GoPro and explained our ideas. They seemed very keen to give us some tips and we’ll certainly be in touch with them over the next few weeks…and hopefully the fruits or our labours will be posted here in due course…but for now, all is hush, hush!

Away from the mini-cams, we resumed our search for cutting-edge grip and finally tried out some of the gear which you all too often see online, or see other people utilising in TV and film, but seldom get chance to have a hands-on with (the great benefit of shows like BVE!). We tried out some great products from Cinevate, Kessler, Cineroid, Kinotechnik, Glidecam, Manfrotto and Titla, to name but a few and now have a pretty good idea of what’s hot and what’s not. At the higher-end, we also saw some great ultra-heavy weight dollies from SolidGripSystems and had an amazing hands-on test of some MRMC motion control rigs, suitable for DSLR and RED Scarlet use…quite a treat, but not on the shopping list just yet… 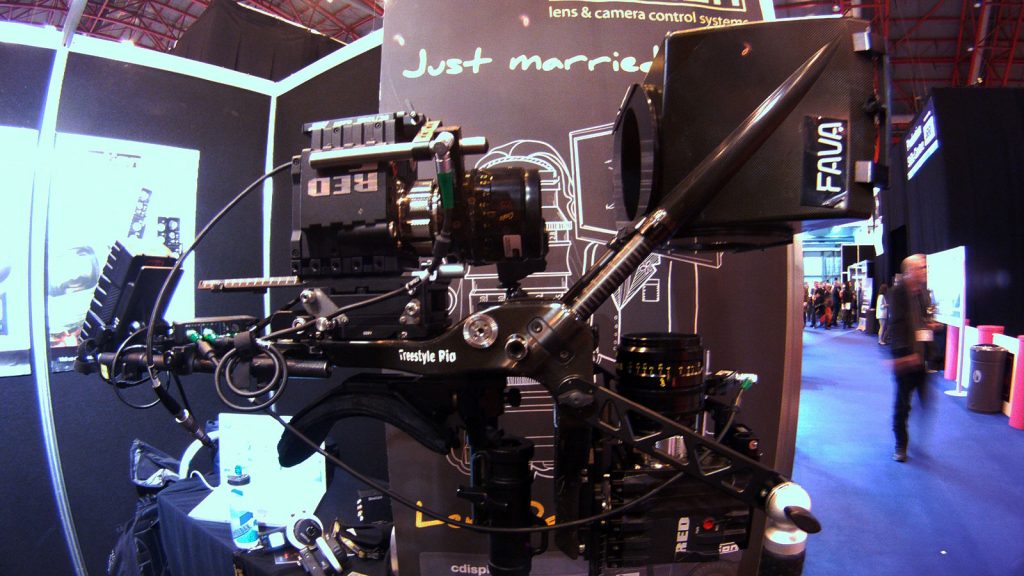 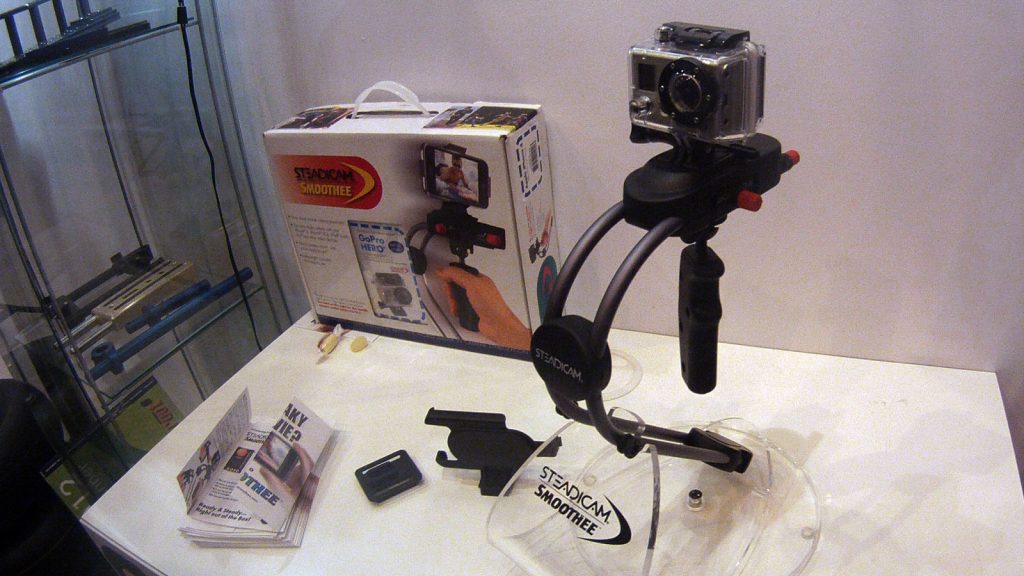 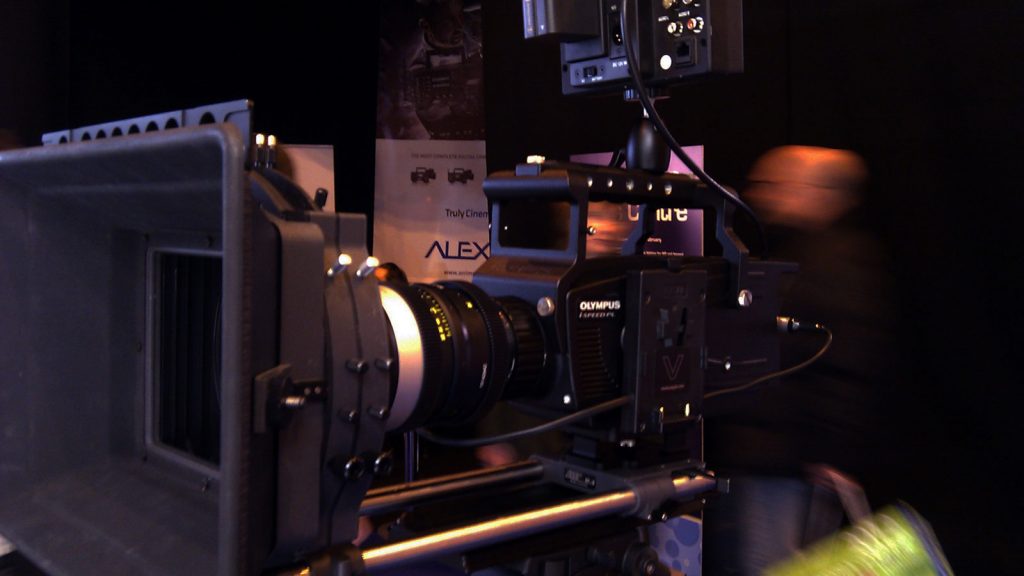 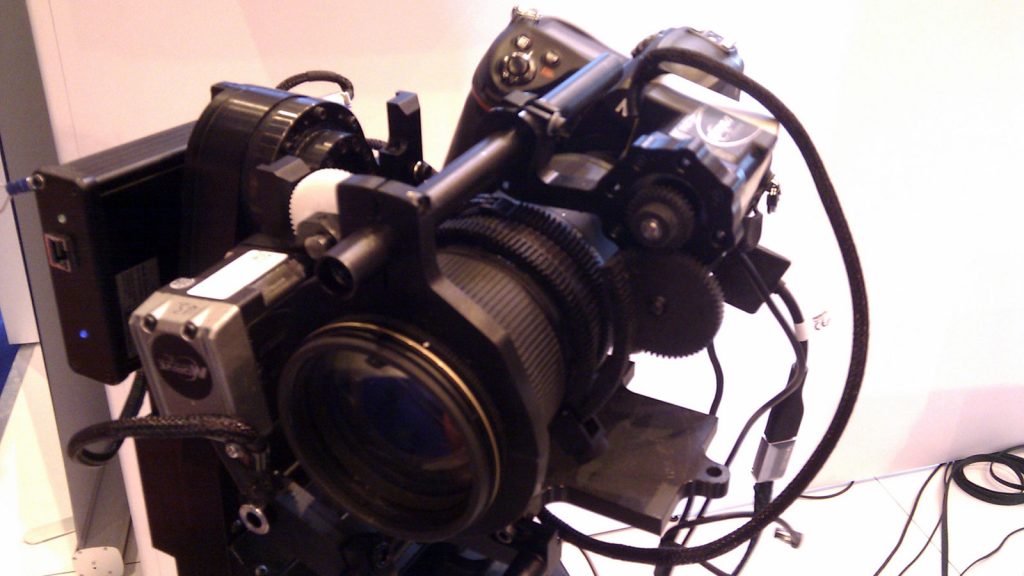 Back to the cameras, one of the big moves in both the broadcast and film industry – and an area we often get asked about for production work – is slow motion, and this year’s show didn’t disappoint, with a slew of upgraded and all new rigs, promising everything from 50 to 150,000 frames per second (no, not a typo)! Of course, the new Sony F65 will give you a range up to 120fps, but if you want more, then you have to move on to specialist kit, such as the Olympus i-SPEED PL (making its UK debut, together with a girl in a plastic box with fans and ping-pong balls…uh, you had to be there, I guess) and the wonderful new Phantom Miro M120, which should at last bring accessibility to this technology down to more penny-conscious budgets (well, maybe a bit…let’s be reasonable). We had a very long chat with the guys from Vision Research (makers of the Phantom range) and aside from hearing about the great features of the new cameras and their more budget-conscious pricing, were very dismayed to hear that one of their £30k camera, together with a Cooke prime lens (I wouldn’t like to guess the price) had been stolen from their booth! Sadly, neither CCTV nor security caught the culpits, so industry people, please be on the lookout for this wonderful little camera being used on someone’s home video. I’d imagine it was an opportunist theft and whoever took it probably doesn’t know what they’ve got, so eBay and/or Gumtree could be primed to have a Phantom being sold for a few hundred quid…very sad news indeed! 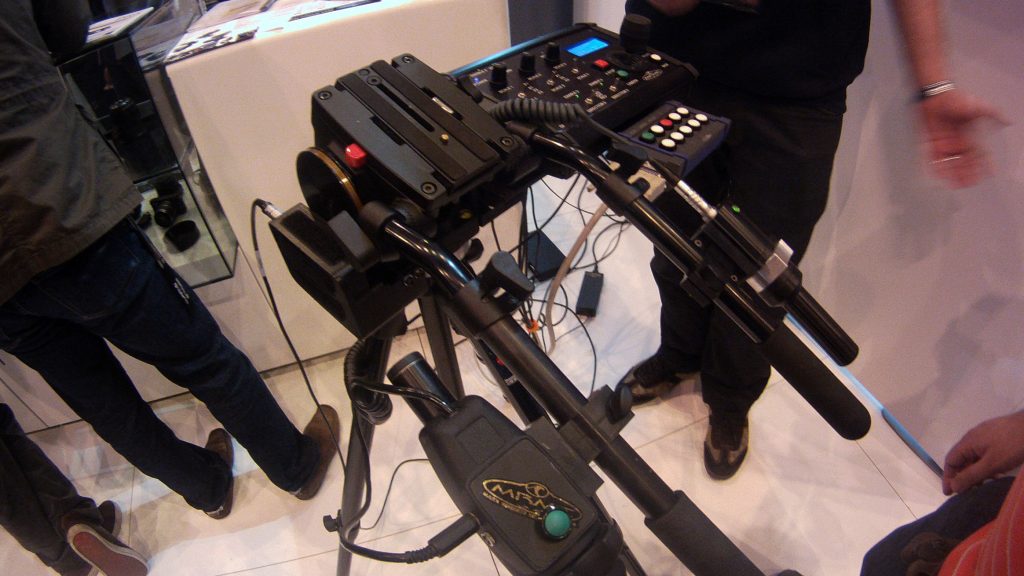 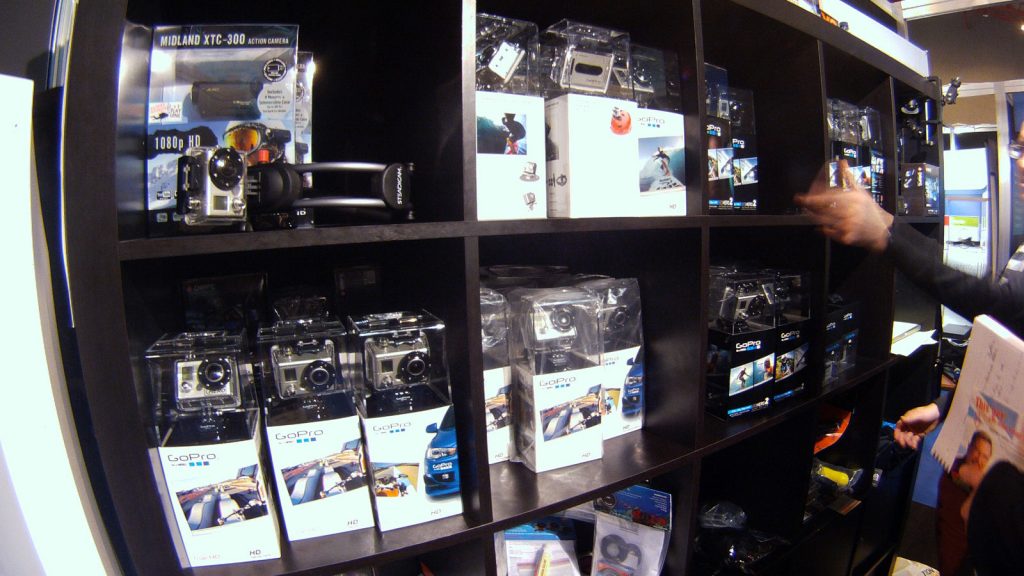 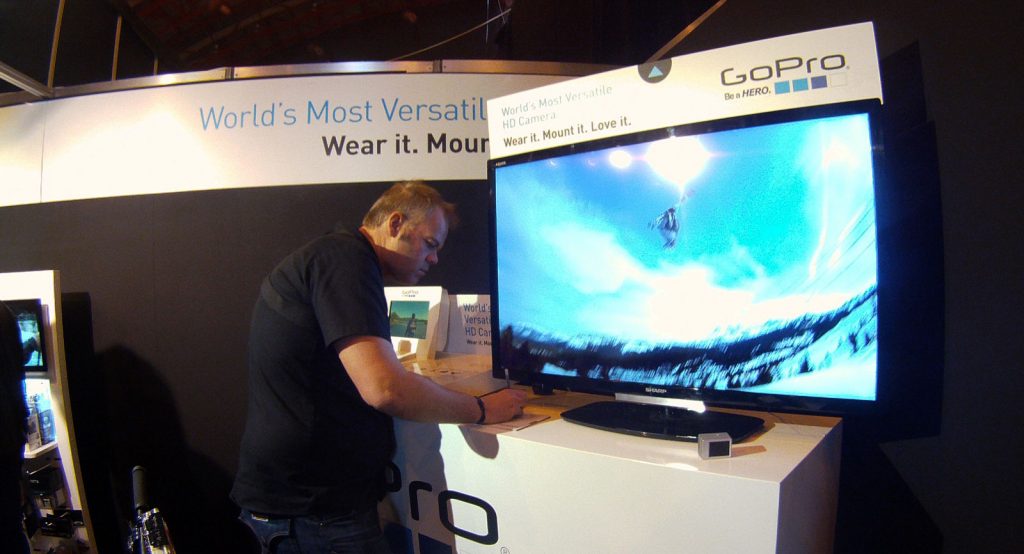 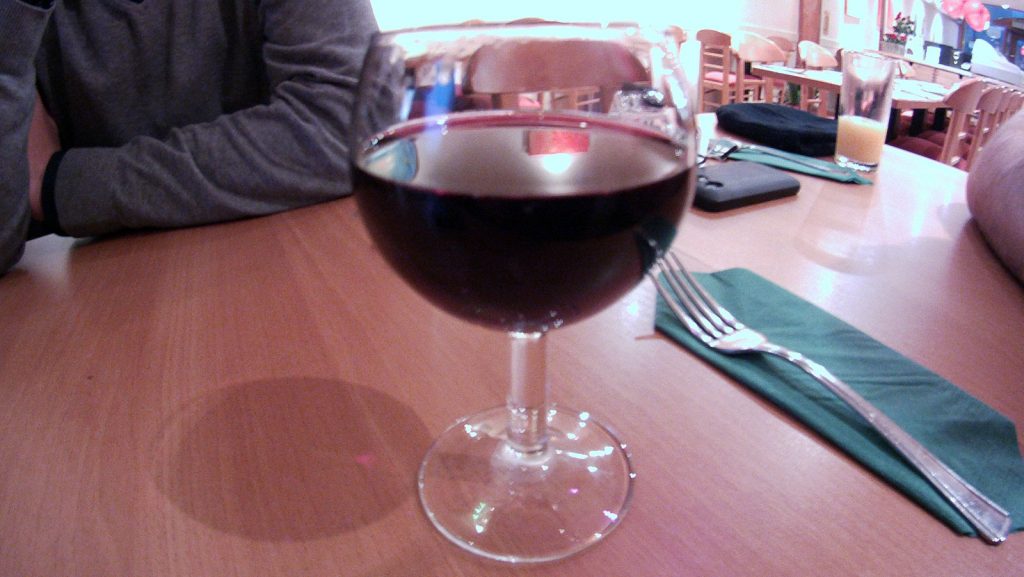 Milky Films on the vino tinto

So with this year’s show finally drawing to an end, it was time to head off to the pub with friends for a good old chat and a spot of networking. Aside from more post-production work this year, Fraktiv is going to be focusing on more filming and production and with this in mind, we had a great chin-wag with Kaushik from @MilkyFilms, who are similarly an Adobe workflow focused studio and a prospective partner for all things production related.