As mentioned recently, we’re in the process of launching our own in-house filming production service, complete with new high-end cameras and facilities to add to our current DSLR setup, and this is very much still on course. We can’t spill the beans yet on our new investments, the high-profile sports production we’re hoping to film in early July, or the project backers, but what we can announce is the name of our production offshoot: geebeebee media.

By way of a warm-up, we’ve been filming what we know and love – freeride mountain biking – and have had the opportunity to shoot a couple of short test films, with a couple more in the pipeline. We recently had a half-day shoot at a local downhill/freeride mountain bike race (held at the Gravity Project in Hampshire, UK), and thanks to our links with Adobe, we decided to give our production skills and worklfow a good ‘ol test by setting our sights on a 4 day turnaround, whilst using Adobe’s new CS6 Master Collection content creation suite, which has just been released (filming and software review below the video)…and here’s the fruits of our labours…

The race event was filmed on a Canon EOS 7D in 720p50 format, using the ProLost Flat camera profile, which we use interchangeably with the Technicolor CineStyle profile; we also used a GoPro HD Hero camera for some POV shots on a notoriously steep, off-camber hairpin, leading to some great comedy moments, though thankfully no injuries…scroll down for the ‘corner cam’ video. On the DSLR, we used a range of modern AF and antique manual lenses, including 14, 35, 50 and 100mm primes, with grip and monitoring equipment from Manfrotto, DSLR DEVICES and SmallHD.

Filming the event – consisting of an open practice session followed by three timed race runs per rider – proved pretty challenging, due to the typically British weather combined with slippery and remote quarry location, though thankfully once rolling, all went very well, and after an afternoon of filming, we had the shots we needed in the bag. In advance of being back at the studio, the DSLR footage was transferred to a Win x64 laptop running Adobe CS5.5 Master Collection (with an Adobe-approved nVidia card, with Mercury support), where footage was logged in Premiere Pro and the project set up, ready for transfer to our studio systems, running CS6 beta software. Once in CS6, specifically Premiere Pro (below), we ran the edit as we would do normally, and without a hitch; no crashes, bugs or hangs…just a totally responsive and seamless experience. Oh yes, our studio systems are slightly older generation MacPros, running Snow Leopard, with no Mercury-supported cards, and are SAN’ed in terms of storage, so the reality of there being no issues – even with these older machines – was both amazing and truly impressive! Long-gone seem to be the days where the latest software needed the latest hardware to even work – of course it always helps – but here, we had no issues at all, and glitch-less, smooth playback at full resolution and 50p frame-rate.

As editing neared completion, we started to think about the VFX shots we wanted to incorporate – including some camera/motion tracking and some basic plate clean-up – and both technical and final grading, a fair bit of which was going to be needed due to the open vs woodland nature of the venue and the variability of natural light during the day. Of course, thanks to the now well-established workflow offered by Adobe’s Dynamic Link technology, the VFX side of things was again seamless, allowing us to process the various shots we needed in After Effects (below) without rendering. After establishing that Dynamic Link worked just as well now as it ever had done, we decided to give one of AE’s new hero features a test…3D camera/motion tracking. There were two shots we wanted to 3D track in particular, both involving camera pan/jib moves with the desired insertion of some basic graphic elements, to indicate the practice and race stages of the event. Basically, at this point, all I can say is wow; the process is intuitive, quick, fairly flexible and amazingly accurate (considering the nature of the material and shooting conditions), and yielded results that were previously the domain of much higher-end tools. This is a tool I can see us using a lot!

Back in PPro, the 3D-tracked scenes dynamically linked into the timeline flawlessly (as ever, with no rendering), which again offers a workflow that really stands out as being a huge time-saver and extremely powerful! With the edit and VFX shots complete, we moved on to the technical grade, for which we decided to use Red Giant Software’s Colorista Free and Magic Bullet Looks (v1.4), both of which installed easily (a little moving of the plugin files in directories was required, but this will of course be remedied in due course) and worked perfectly! Approaching the technical grade, we decided to use a very exciting and arguably very simple but powerful new feature within PPro: adjustment layers. As After Effects users know, adjustment layers allow for non-destructive application of effects and settings to clips, and now this power is available natively within PPro. To test out the new PPro version of this feature, we decided to apply the technical grade – via the plugins mentioned –  to an adjustment layer above the main timeline (the ‘broken’ pink line in the screenshot below), which allowed us to grade shots from a baseline setting – applied by default to all the clips – and then refine it as and when needed, by cutting the clip as you would do any normal clip, and then changing the settings. This made for a powerful, quick and easy way to process a technical grade, especially when using the three-monitor view, as seen below. Finally, we applied a very basic Magic Bullet grade on another adjustment layer, which extended through the entire edit, serving to bring everything together.

For the final pass, we turned to Adobe’s new flagship grading tool, SpeedGrade (below). Our Premiere Pro timeline was easily ‘sent’ to SpeedGrade via the new menu entry – working in a similar way to Dynamic Link – presenting the edits from our timeline in SpeedGrade, ready for further work. Given that our familiarity with SpeedGrade wasn’t all that good, the application certainly felt very ‘Adobe’ and we quickly felt able to tackle some basics. For now, and given we were keen to complete the project within the time window we’d allocated (especially considering our day job!), we decided not to get too involved with SpeedGrade on this edit, but it’s easy to see that one could very easily spend a lot of time in this very capable tool. Hopefully we’ll get more comfortable with it soon and have opportunity to put in some hours to unlock its industry-renowned reputation! 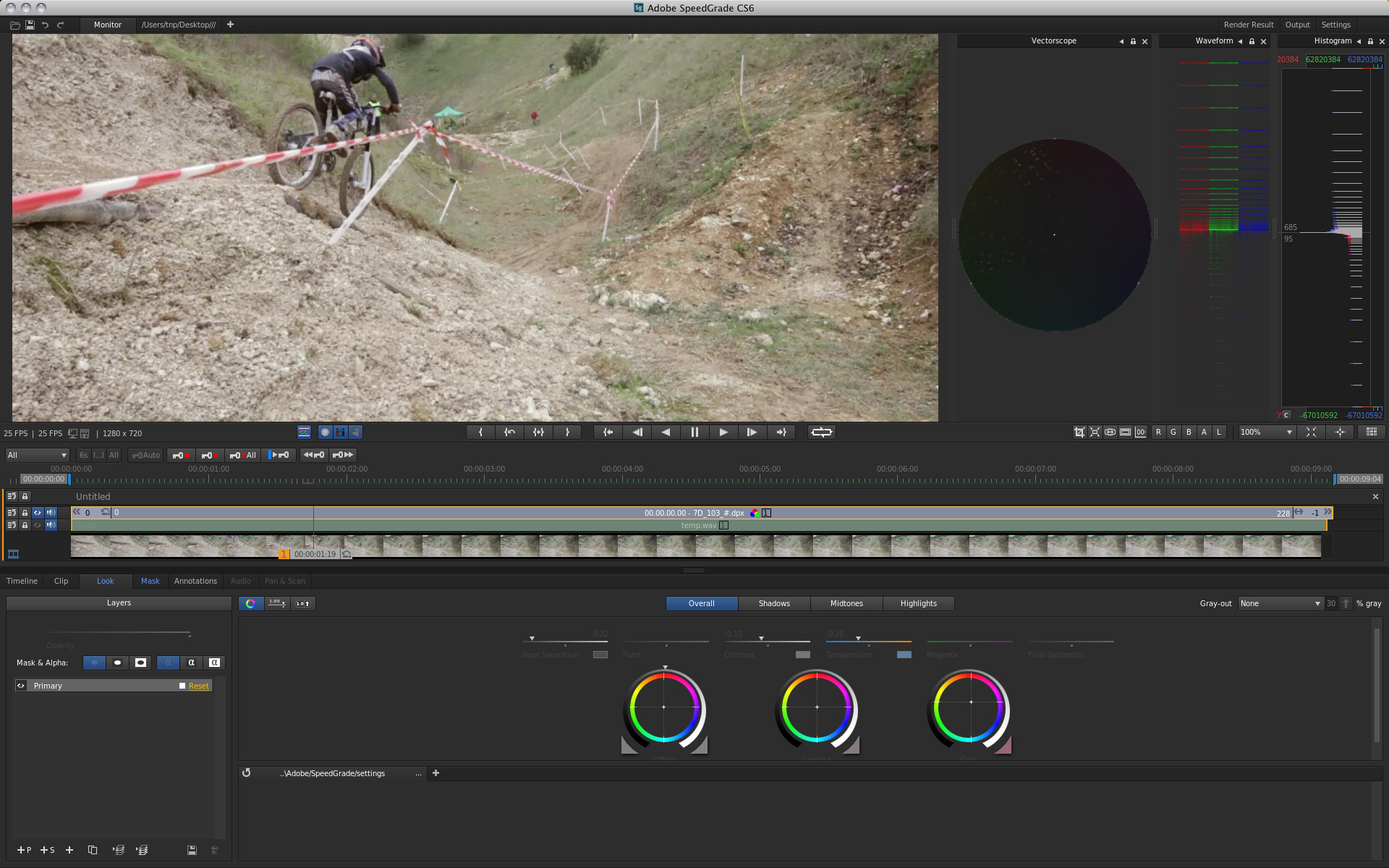 Coming to final output, and considering the older generation of machine we were using, we were very impressed with the rendering speed, with the system almost maxing out all the processors, and seemingly outputting the finished 7GB QuickTime ProRes 422 HQ file in double-quick time. Final encoding to an H.264 720p25 Vimeo file was handled by Adobe Media Encoder (via a handy new built-in PAL-friendly preset, so no more amending/re-saving an NTSC one now!), which similarly seemed to fly through the 2-pass VBR encode.

Overall, with the release of CS6, Adobe have delivered us an awesomely powerful set of tools, with many useful, time-saving and creative features that far surpass what many other ‘software suites’ offer. The wheel has not been re-invented here, but the tyre’s been upgraded, the rim strengthened and the alloy very much pimped! (Ed: please…no more metaphors!) Here at Fraktiv – and through our new venture at geebeebee media – we’re already putting CS6 through its paces on several more edits, and you can of course check these out first on the Fraktiv blog and via twitter: @fraktiv.